35% off SALE on now. important note, there is no returns or exchanges on sale items Well hasn't 2020 been a year full of surprises. I mean never in our right minds, did we think that we would not be racing and that there would be no Kona, no Ironman World Championships.

Stomp the Pedal created their first trucker, after founder, Tarsh had been collecting them every year since 2014 whilst was out in Kona.

When asked why, she had this to say 'I remember being in Kona in 2016 and collecting my largest haul of truckers to bring back with me to fill my training room wall and I said to my husband at the time, next year I am going to have my own trucker. Little did I know that I would be starting the brand. And I did exactly that, in 2017 I had two designs and every single one of them went. It then became a tradition that every year Kona I would issue the limited edition Kona trucker.

This years design features the STP logo in smaller size floating all over the front of the trucker, and also under the lid. The top the lid is plain back but with rainbow detail stitching. The 5 mesh panels is like that of the unicorn (sounds awful I know but hey ho). On one side of the cap it states STP 2020, and on the centre back of the trucker is states No Kona 2020. With the Kona cris crossed out. To emphasise there is indeed no Kona in 2020. The final piece in the badge on the front. Really simple -  S T P est 2017. See the behind the scenes pics below.

The headgear is made by BocoGear.

BocoGear use performance fabrications in the front panel for a lightweight trucker that you can train, race or use for everyday activity.  There is a mesh polyester liner behind the front panels that will wick sweat while you sweat.  The Technical Trucker® hat has a performance wicking sweatband that will move moisture to keep you comfortable during any activity. 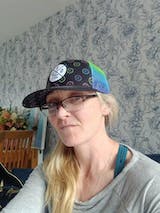